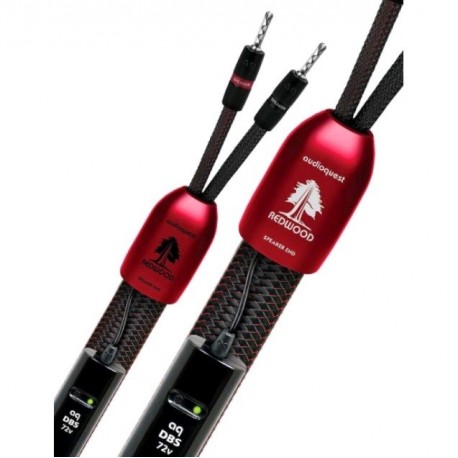 Redwood stands as a giant among its peers. The carefully finessed combination of Solid Perfect-Surface Copper+ and Perfect-Surface Silver conductors allow your music to present a sound field that is both large (as it was intended) and coherent. The addition of silver offers a significant improvement in ease and resolution.

SOLID PERFECT-SURFACE COPPER+/PERFECT-SURFACE SILVER (PSC+/PSS) CONDUCTORS: Redwood uses a carefully finessed combination of Perfect-Surface Copper+ and extremely high-purity Perfect-Surface Silver conductors in a Self-Shielding Counter-Spiral HyperLitz. Solid conductors prevent strand interaction, which is the greatest single source of distortion in an audio cable or an AC power cable. Surface quality is critical because a conductor can be considered as a rail-guide for both the electric fields within a conductor, and for the magnetic fields outside the conductor. The astonishingly smooth and pure Perfect-Surface eliminates harshness and greatly increases clarity compared to OFHC, OCC, 8N and other coppers. Extremely high-purity PSS further minimizes distortion caused by grain boundaries, which exist within any metal conductor.

CARBON-BASED MULTI-LAYER NOISE-DISSIPATION and CROSS-TALK-DISSIPATION SYSTEM (INSULATION): The negative conductors in Redwood are insulated with partially conductive Carbon-Loaded Polyethylene. This remarkable material damps radio-frequency garbage from being fed back into the amplifier. The sonic benefit is exactly the same reduction in “hash” and better dimensionality that comes whenever RF garbage is reduced in an audio circuit. Redwood uses Nitrogen-Injected Foamed-Polyethylene Insulation on its positive conductors because air absorbs next to no energy, and Polyethylene is low-loss and has a benign distortion profile. Thanks to all the air in Foamed-PE, it causes much less of the out-of-focus effect common to other materials.

DOUBLE COUNTER-SPIRAL GEOMETRY: Redwood and the other AQ “Tree Feature” cables have an inner circular array of positive conductors spiraling in one direction. Around this inner group are the negative conductors, spiraling in the opposite direction. Even while the positive and negative conductors are crossing each other instead of being parallel, the relationship between the positive and negative groups is fixed and non-changing, adhering to one of AudioQuest’s most basic design tenets: consistency. The result is an astonishing clarity, like focusing a camera lens you had no idea was so far out of focus.

SPREAD-SPECTRUM TECHNOLOGY (SST): Any single size or shape of conductor has a specific distortion profile. Even though radially symmetrical conductors (solid round or tubular) have the fewest discontinuities, any conductor of a particular size does have a sonic signature. SST uses a precise combination of different size conductors in order to significantly reduce the audibility of these character flaws. The different SST-determined conductor sizes used in Redwood allow an exceptionally clear, clean and dynamic sound.

BIWIRING: When possible, running separate conductors or separate cables to the treble and bass halves of a speaker will considerably reduce distortion. BiWiring reduces distortion by keeping the large magnetic fields caused by bass energy out of the treble cable, allowing these delicate upper frequencies to travel a less disturbed path. Although Redwood is an ideal full-range cable, it can also be used as a double pair for maximum benefit from BiWiring. Redwood has also been designed to make it possible to Single BiWire. The five conductors per polarity have been chosen and arranged so that they may be divided into two groups, allowing Redwood to be prepared with four connections on the speaker end.

TERMINATIONS: AudioQuest offers a wide range of high-quality connectors that allow Redwood to be securely attached to any type of equipment. Quality is in the low-distortion sound, not necessarily in the eye-candy effect. AQ ends are either a dull looking gold or silver because these metals are plated directly over the connector. There is no shiny and harsh sounding nickel layer underneath. AQ PK-spade lugs are soft because better metal is soft, and facilitates a higher quality connection. For pieces requiring a banana plug or BFA connector the AQ PK-BFA/Banana provides unprecedented performance over conventional brass versions.